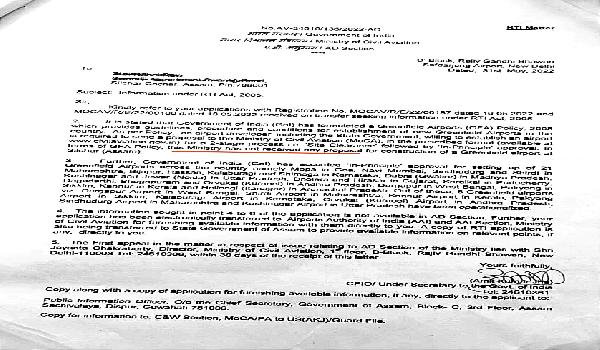 SILCHAR: Civil Aviation Ministry, in response to an RTI, says there is no proposal yet for construction of greenfield airport in Silchar

Copy of the RTI.
On May 31, by the time the Assam Government has already uprooted tea bushes from a functional garden in Daloo clearing an area of 2500 bighas, an RTI response from the center is making waves. Under secretary to the GOI, Amit Kumar Jha responded to an RTI requesting information regarding a proposed Greenfield airport at Shilchar.
The land acquisition through uprooting of about 30 lakh trees happened in unusual circumstances, 144 CrPC had been imposed, over a thousand police and CRPF personnel were deployed.
The RTI response read: as per Greenfield Airports (GFA) Policy (2008), an airport developer (including any State Government) willing to establish an airport is required to send a proposal to the Ministry of Civil Aviation (MoCA), in a prescribed format for a two-stage process. It starts with site clearance followed by in-principle approval In terms of GFA Policy. But such a proposal has not been received by the authorities.
Central government has so far given approval for setting up of 21 Greenfield Airports across the country including one in Arunachal Pradesh. Eight of these 21 Greenfield airports have been operationalised according to the ministry.
The respondent failing to answer a few questions, forwarded the queries to the government of Assam and the Airports Authority of India (AAI).